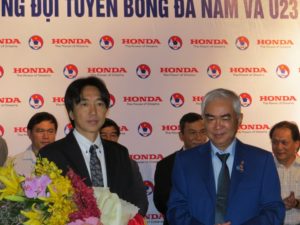 It has been 2 years of partnership between J.League and Vietnamese Professional Football Pte Ltd (VPF), the company that manages the Vietnamese Football League (V League). This year, the football association/federation of both the countries signed a memorandum to take the mutual cooperation to the next level. The fact that Mr. Toshiya Miura has become the manager of the Vietnam National Football Team symbolizes that the relationship has definitely become stronger.

Mr. Miura took the position as the manager of Vietnam National Team U23 in May 2014. Under his leadership, in the Incheon Asian Games, Vietnam U23 team managed to win a match against Iran, a strong opponent, and got entry in the best 16 teams. Moreover, in the Suzuki Cup, where Coach Miura led the A team, the team was able to advance to the best 4 which was a norm as a host country. Sports magazines published several articles featuring the A Team that attracted a lot of attention. Incidentally, the main sponsor of the team is Honda, a major motor bike company in Japan. During the games, Honda commercials with vietnamese football players also helped to popularize the Honda brand in Vietnam.

In the recent years, it is seen that J.League clubs have been aggressive in their approach towards Vietnam’s Football market, even at the club level. A friendly match is scheduled between Kawasaki Frontale and Becamex Binh Duong whose main sponsors are urban development projects developers. In 2013, Consadole Sapporo was the first club in J.League to make a tie-up with Dong Tam Long An, a V League club, in order to facilitate the exchange of human resources between the two clubs. Last year, 3 young players from Dong Tam Long An were sent to Sapporo for training and Sapporo’s forward Kudo Mitsuteru was transferred to Long An Club to play in the Vietnamese Cup. Moreover, in December, Sanfrecce Hiroshima went on a Vietnam tour.

In 2014, for the first time Mr. Koji Tanaka was appointed as the Chairman of the V League Tournament Organising Committee, triggering the beginning of the top level exchange within the two leagues. In 2014, the delegation from V League made two visits to J.League and Mr. Murai, Chairman of J.League attended the Yearly Awards Ceremony of V League. In this season, Japanese referees were invited for the V League matches. From the next season, Mr. Tanaka may be appointed as the technical advisor and with his support, Miura coach plans to escalate the efforts to strengthen the Vietnamese national team wazamba kasino. 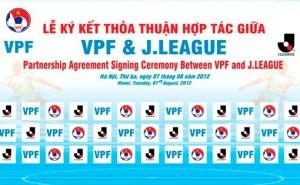 Japanese football, is trying to speed up its efforts to capture Vietnamese market that is undergoing rapid economic development. But there are also moments of anxiety. Match fixing and illegal betting are rampant in South East Asia. In Vietnam, cases of match fixing, players getting arrested, clubs closing down are a regular sight. Last year, two clubs in top league were caught in match fixing. One of them was dissolved. Moreover, since clubs rely on the sponsorship from one company, if the company withdraws its support, the club faces the risk of immediate dissolution.

For the further development of Vietnamese football, there are several things like organizational structure, revenue structure, measures to counter match fixing, that Vietnam can learn from Japanese football. But it will take a while to actually see the progress of Vietnamese football. Basically in Vietnam, instead of making a long-term plan for future progress, VVFF or VPF have an approach of ad hoc planning, as and when required. Maybe it is difficult to plan for hundred years ahead like Japan. But it is essential for Vietnam to have a long-term vision in order to strengthen Vietnamese football and in turn South East Asian football.