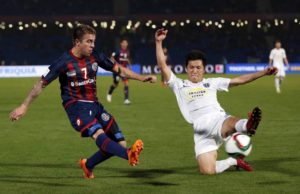 Takuya Iwata in action at the Club World Cup

In the recent years of Southeast Asian football, we have seen an increase in Japanese footballers pursuing their passions in the nations surrounding the South China Sea. Singapore and Cambodia are the most notable inclusions as their national premier leagues contain the international edition of Albirex Niigata FC. This club not only attracts Japanese players to transfer to these leagues, it gives the surrounding domestic teams a taste of what footballers from the land of Samurai are all about.

Following our last article on Auckland City FC, we contacted 31-year old Japanese defender, Takuya Iwata, and asked about his emotions coming out of a third place finish at a Club World Cup, and into a friendly against his home nation Japan.

Along the way we also spoke about Japanese footballers playing elsewhere than Japan’s national leagues, even if it is in a less significant league to the ones in their homeland, noticeably the S-League and in Takuya’s story: North Queensland Premier League.

The idea of moving abroad for more money or a higher level of football is tempting, but for Takuya a move to Australia then followed by a switch between two leagues noticeably amateur in comparison to his earlier competition, paid off in a dream-come-true third place finish in the Club World Cup. Here’s Takuya Iwata (TK) and his journey to the Club World Cup semi-finals, and now a dream date with his home nation’s national team.

So Takuya, please tell me a bit about your time in Japan as a child, and what made you want to become a football player? Who were some of your idols at a young age, was it a Japanese player?

TK: I started playing football with my friends when I was a child in Japan and I always loved the game. Then, I started to aspire towards becoming a professional player either in Japan or overseas. Throughout my childhood my idol was Kazuyoshi Miura, a ten-year player for the Japanese national team who also represented his club in the Club World Cup, I have always wanted to be like him.

When you left FC Gifu in Japan and came to Australia to play in Queensland, what did you think of Australian football? Can you compare it to any other styles of football?

TK: I felt like there was some restriction on my game when I was playing earlier into my career in Japan. However, when I moved to Edge Hill United in North Queensland, they welcomed me and I started to enjoy playing a lot more as a player abroad. Even though Edge Hill United was in a local league for the district only, and the quality of the games were not as high as the clubs I’d played for in Japan, I could fully concentrate on football just as though I was a little kid again. I believe in terms of the styles of football, in both Australia and New Zealand there is a higher level of body contact out on the field, which could easily be inspired by the popularity of games like Rugby in these areas.

How have you enjoyed your time in Australia and New Zealand so far?

TK: Both in Australia and New Zealand, I play football while having another job so it can keep me busy every day. But on a day off, I enjoy going to a café with my friends to relax. 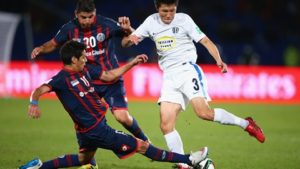 There are some Japanese players in Europe, but many are now choosing to play in South East Asia, countries like Singapore are quite popular. Do you think in the future more Japanese players will come to Australia or New Zealand? Does Australia being in the Asian Cup and ACL change that?

TK: More and more football players overall are going to play in different countries and the number will continue to rise in the future. Since I was in Australia, the number of Japanese players here has increased, and there are also more Japanese players in New Zealand each year. Having Australia in both the Asian Cup and ACL might have helped this trend.

Did you know that in the recent Club World Cup, you were the only Japanese player in the tournament! Did it feel like you were also representing Japan when you were playing?

TK: Yes, I was the only Japanese player in the recent Club World Cup. And although there was another team with the job of representing Asia, when I was playing, I was always thinking about representing Japan and I wanted to be remembered by many supporters.

What did it feel like to come third place in the Club World Cup? Obviously, the games you encountered on December’s journey were some of the biggest games in your career.

TK: I still can’t believe what happened… It was one of the tournaments that I have been watching on TV since I was young, and I was only dreaming about actually playing in it. Now for a team like Auckland City FC to place third in the tournament, I am really proud of the achievement. Not only as a player, but also as a person, it was my biggest challenge of my life. 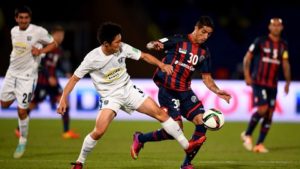 You are playing your own national team on January 4th in a charity friendly at Cessnock, Northern New South Wales. Will it be a weird feeling to play against your home country like that? Have you always wanted to play against Japan?

TK: Now that I am not only playing in the Club World Cup, but also play against Japan, it’s something I had never thought about before. There are lots of surprises at the moment. It’s a good experience and I feel that my game is benefitting.

For Auckland City FC vs Japan, what will be the hardest part for your team of playing Japan? Have you told any of your teammates how the Japan representative team will play, as I’m sure you’re a big fan of the Samurai Blue?

TK: So far, I have been playing against playing non-Japanese teams and players so to be honest, playing against Japan will not be easy. In my opinion, the Japanese play with flexible moves and a tactical combination to endanger the other side. It’s dangerous if we can’t overpower the players that choose to mark us out on the field. While Japan has plenty of experience playing against different teams from different countries, Auckland City hasn’t played against a national team that plays like Japan. That may provide our players with a sudden level of confusion. Our players, including me, take this match just as seriously as our fixtures in the Club World Cup and we will be fully focused. I haven’t any given advice on Japan to my teammates yet, us players all trust the strategy made by our head coach who does a lots of research on the opponents.

What do you think are the strengths of Auckland City FC? How will your side put Japan in danger? Is it a strong defence or attack you have?

TK: We will play just as we played in the Club World Cup, with a solid defense and plenty of running as a team we can create a certain flow from our strong defense to attack, that is what endangers the opponent.

When you travel to Cessnock for the match, which Japanese player would you most like to meet? Will you try meet with them after the game?

TK: I will firstly try to meet Shinji Okazaki because I know him as a friend. Also, I would like to talk to Yuto Nagatomo, who plays for Japan and Internazionale in the same position as me (Wing-back). There are plenty of others who I want to talk to and if time allows me to after the match I will approach them for a chat. 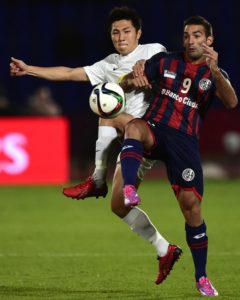 Now that Auckland City has made history for the Club World Cup, and for New Zealand football! What was it like returning to Auckland after the tournament? Do you consider yourself a celebrity now?

TK: Not only for Auckland City FC but also for New Zealand football, the result of this year’s Club World Cup has been a good influence and I believe this will help the development of football here. I might’ve been treated like a bit of celebrity if I had returned to Japan after Club World Cup (but I didn’t). New Zealand is a quiet and small county so I don’t feel like I have become famous here. Although, I believe that lots of people know of the name Takuya Iwata just as they do with the other players of Auckland City FC now.

Is your current aspiration to play at Auckland City FC for the rest of your career? If there were an offer, would you move anywhere else? Maybe back to Japan?