On 12th February, F-League and Bardral Urayasu announced that Bardral Urayasu will go on its first Indonesia Tour. This will be the first experimental Indonesia tour by the F.LEAGUE. They will have a match with the Indonesian national team in Jakarta on 11th and 12 April.

This tour is organized in collaboration with XYZ (cross wise), an specified NPO that works for social causes in several Asian countries. The tour sponsor is Benesse that is trying to reach out to the Indonesian market in educational services. This combination of CSR activities and popular sport like Futsal is definitely a perfect plan to enter into the SEA market.

Due to its proximity to the equator, SEA countries are hot throughout the year. As against football that is played outdoors, Futsal is an indoor sport and is generally common in places with harsh climatic conditions. Hence FIFA is considering SEA as strategically important area for popularizing Futsal.

A Futsal Court in Jakarta. It is a 20mX40m polymer pitch with international standard

In SEA, where football is very popular, futsal is also gaining popularity. In most of the SEA countries you can find private futsal courts like those in Japan. The futsal courts that Urayasu will use during the Indonesia tour are all open 24 hours and still fully booked even on weekdays. This is exactly the same situation as Japan in 1998 when it that made its first appearance in the world cup and hosted the world cup in 2002. 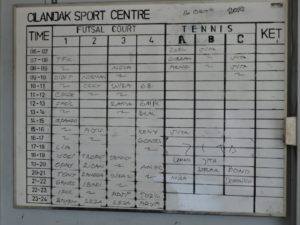 All futsal Courts in Jakarta are fully booked.

Japan is losing its stronghold in football but in futsal it is still able to maintain its position as Asia’s top team. This is because the market of futsal is smaller as compared to football buymyhouse7.com. But on the other hand, it can be said that it is a good way to enter the Asian market at a comparatively smaller investment. 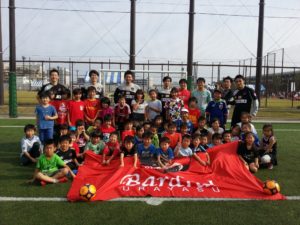 At Urayasu Hit by The Great East Japan Earthquake, Bradral team members supporting the Urayasu Citizens. A Similar scene will also be seen soon in SEA

At the time of announcement of the Indonesia tour, Yasuhito Matsuzaki (COO of F.LEAGUE) told the Japanese media, “We want to tour not just Indonesia but other countries as well.” This makes their intentions clear that they are eager to expand in SEA.

Urayasu Bardral was the first one to apply the “F.LEAGUE Asia Strategy”. The name ‘Bardral is derived from Spanish word ‘Barco’ meaning ship and ‘Dragon’ that can fly high in the sky. Definitely Bardral is making moves to prove worthy of the vision of the team.

After 8 seasons from its formation F.LEAGUE has taken the initial steps to enter Asia. We will keep you updated with all the latest news of this tour.