J.League announced that Gamba Osaka, the 2015 J.League Champion, will have the match in Jakarta, Indonesia in coming January. This match, previously scheduled in June this year was postponed and will be now held as per the schedule given below. 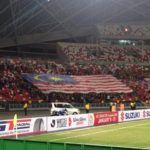 This channel opened on 22 Feb 2014, is now broadcasting in INDOVISION, Okevision, BiGTV, First Media, OrangeTV, Transvision in Indonesia and 4TV in Myanmar.