With Tottenham Hotspur preparing to visit South-East Asia for their clash with the Malaysia XI on Wednesday night, a group of passionate Malaysian football fans known as the “Ultras Malaya” are planning a boycott of the fixture. Their protest, largely based around social media, which includes calling on fans to shred tickets to the fixture and resist watching the game on TV, has now gained international press coverage as the retweets increase.

A post on ultrasmalaya.net explains to Malaysian football fans how to boycott the fixture.

Ultras Malaya was created in 2007 after the Malaysian national team failed to perform in the Asian Cup hosted within their shores. Since then, Malaysia’s home and away fixtures have experienced a more tribal and fanatical atmosphere as fans decide to inspire their team with a level of support mirrored from places like Europe. Fan groups incorporating the Ultras culture have now dominated the home ends in all twelve states of the country. Despite strong rivalries between clubs in the MSL (Malaysian Super League) being the fuel behind strong atmosphere at many of the league’s games, these fan groups representing states in Malaysia have a mutual respect with each other when it comes to supporting the national team. Thus creating a force that has been both successful and controversial in the eyes of the Malaysian football governing bodies.

On the 1st of March, 2014 an international friendly match took place between Malaysia and the Philippines at Selayang Stadium near Kuala Lumpur. If you hadn’t been on social media in the lead-up to the fixture, you’d be excused for thinking suspiciously of the Ultras Malaya as they collectively remained silent for the first 30 minutes of the game. Once the half-hour mark arrived, marine flares and smoke bombs were let off by the dozens as Malaysia’s active supporters protested 30 years of no change in the governance of Malaysian football. The match was soon halted for eight minutes as the cloud of orange smoke drifted towards the playing field. This pyrotechnic display was ultimately aimed at the FAM (Football Association of Malaysia) and this upcoming protest should be no different.

The decision by the FAM to host an exhibition fixture between Tottenham Hotspur and an XI made up of Malaysia’s star players is likely to harm the Malaysian national team as they attempt FIFA World Cup 2018 qualification. Players are now at risk of injury and fatigue as the likes of Saudi Arabia, United Arab Emirates and Kuwait will soon hit the shores of Malaysia. In addition to these factors, a proposed friendly match between the Malaysian national team and neighbouring Philippines had to be cancelled due to the upcoming exhibition fixture, along with some of Malaysia’s top-tier local fixtures being rescheduled to accommodate the EPL club’s visit. 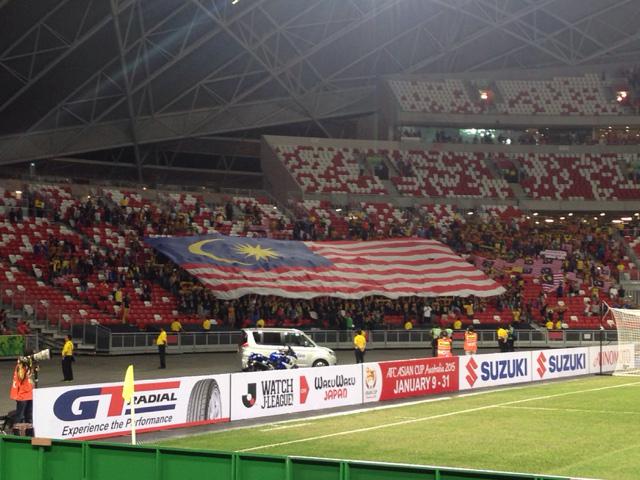 Ultras Malaya at an AFF Suzuki Cup fixture in Singapore. Their numbers were restricted by the FAS.

Fixtures similar to the upcoming clash with Tottenham Hotspur, known as exhibition matches, have increased over the last few years not only in Malaysia but South-East Asia. Last August, a lineup of Indonesia’s best was thrashed 8-1 by Serie-A club Juventus at home. While Singapore’s refurbished national stadium kicked-off with an exhibition match between Juventus and a Singapore select XI. And this July, three EPL clubs will visit the island nation for the “Premier League Asia” whose participants include a selection of Singapore’s top footballers.

The catchphrase distributed on social media by the Ultras Malaya is “#SayNoToCircusGame”. The term draws inspiration from “#SayNoToRacism” which was promoted by FIFA during last year’s World Cup in Brazil. “Circus Game” is used in relation to these exhibition matches where teams like Tottenham Hotspur generally visit Malaysia for the money and to put on more of a “show”. This game will likely carry little importance in the eyes of Tottenham Hotspur as their season in England has already ended meaning the players could be fatigued from both this and their travels.

Last year, a selected Malaysian XI fell out 3-1 to Barcelona at a packed Bukit Jalil Stadium. However, the atmosphere in the ground was petty when compared to last year’s AFF Suzuki Cup, where Malaysia played at home to Thailand in the second-leg of the tournament’s grand final. An unfortunate loss did absolutely nothing to stop the home-end of the ground from participating in the “Demi Malaysia” chant where supporters turn around and jump in synchronisation.

Football is quickly becoming more of a business and this trend is difficult to halt. There is both good business and bad business in football meaning fans can choose a reaction to how their club is managed. The Ultras Malaya has recently expanded their horizons to performing chants at Malaysian women’s Football, Hockey and even Rugby games. Wednesday night’s fixture will not only feel like foreign turf for Tottenham Hotspur as Malaysia’s selected XI will likely feel a sense of confusion when the stadium suffers the absence of some notorious football chants.