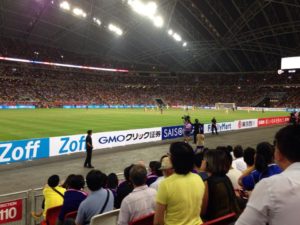 Japan vs Brazil Match in Singapore in October 2014

According to Nikkan Sports, a leading sports newspaper in Japan, the Japan Team has started the preparations for the first Preliminary Asia Qualifying Round for the 2016 Rio De Janeiro Olympics, to be held next year. The opening game will be held on 23rd March 2015. At the J-League Conference held on 4th Nov 2014, in JFA House, located in, Tokyo, it was announced that in order to strengthen the team, 3 practice matches have been planned. All the clubs were requested to support by sending their players. During the South East Asia Tour in December, the Japan team will be playing against Thailand Team and Bangladesh A Team. The match between Japan and Thailand U21 teams took place in Thailand yesterday and Japan won the match by 2-0.

Japan will leave Bangkok and travel to Bangladesh on 16 Dec and will have match against Bangladesh A team at Dhaka on 18 Dec.

In addition to this, it is confirmed that a training camp will be held for the Japan team in Singapore from 11th February to 15th February 2015. During this period a friendly match between Japan and Singapore U21 Team, will also be held.

According to Japan team Manager Mr. Teguramori, the 3 matches in South East Asia will be very helpful to strengthen the team to qualify in the Preliminary qualifying round of the Rio Olympics. For the preliminary qualifying round, Asia is divided into 4 groups each, in East and West region and the games will be held in 4 different countries in East Asia. The AFC U23 Championship acts as the qualification to the Rio Olympics for the Asian Football Confederation with the top 3 teams qualifying. Iran, Bangladesh, Pakistan, China, Malaysia, Indonesia, Chinese Taipei are the venues for the matches. Since Japan has to play against Malaysia, Vietnam and Macau in this group (I), and the matches will be held in Malaysia, it needs to prepare for the hot weather and in that case, the December 2014 Tour to South East Asia will be very beneficial. In this tour, Japan will play against Thailand and Bangladesh A teams.

The announcement that the team has to fly towards the equator for the Preliminaries was confirmed only one month prior to the first qualifying round. Japan will have a friendly match with U21 Singapore team in their home ground as final practice before the actual game. In October, Japan A team had a match against the Brazil team in Singapore. In February, the temperature there will be above 31 degrees. This will prepare the Japanese players for playing in the hot weather.

All these Asian countries have a lower ranking as compared to Japan, but according to the Japan Federation it is very important to have the experience of these matches. The Japan U21 team has so far played 10 international matches (including the practice matches) but out of the 10 matches, 7 were in favour of the Middle East. In South East Asia, Nepal is the only country that will be participating. We cannot forget that in October; U19 Japan team was defeated very badly by the Vietnamese team.  Hence in order to overcome the hurdles of the preliminary qualifying round, it is very important to get adjusted to the weather conditions.

The schedule of the December tour will also add to the stress. Within a short period of time, the team has to travel from Thailand to Bangladesh. Manager Mr. Teguramori said, “The team has to play in very hot weather, in football pitches that are not in a very good condition. This is a challenge. To add to this, the team has to travel between matches. Also, the team will have to play the matches after very tiring training sessions.” This kind of stressful schedule will prepare them for the actual game He said that he wants tough players who can play on fields in foreign soil and that too in unfavourable weather conditions.

This South East Asia tour will make the Japan U21 team stronger, both physically and mentally and will definitely prove to be the best possible preparation ahead of the preliminary qualifying rounds for the Rio Olympic Games.