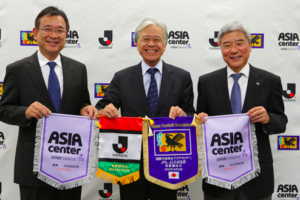 The Japan Foundation Asian Center, Japan Football Association (JFA) and J.League announced that they have all signed a MOU regarding the football related exchange and co-operation activities.

Japan Foundation newly established its Asian Center in April 2014 to accelerate the cultural exchanges in the various fields such as art, education sports, Japanese Language etc with an aim to nurture a good relationship amongst asian neighbors and to develop mutual coexistence as asian citizens looking forward to 2020 Olympics and Paralympics in Japan.

This Japan Foundation Asian Center, in collaboration with JFA and J.League, plans to expand the scope of exchanges between Japan and South Asian countries with the help of football , which is one of the most popular sports in the world.

Based on J.League’s Asian strategy that increasing the level of Asian football will lead to strengthening of Japan football strengthen, recently the exchanges of the players and coaches are being conducted between Japan and Asian countries have begun to rise, and the matches of Japan national team and J.League are being broadcasted more often.

With this background, the presence of Japanese football is being strongly felt amongst the football fans in Asia, especially SEA. Moreover, it is clear that larger number of people from football communities in various Asian countries have started voicing the need for promoting the exchanges with Japanese football.

It seems that Japan Foundation Asian Center are considering that they would like to deepen the good relationship and link to promote “Asian Football” which is leveled up by cooperation toward the world.

We, Institute of Future Asian Football, are also making efforts to support this activity in aspect of PR, HR development and HR exchange.

The overview of this MOU and upcoming activities are as below