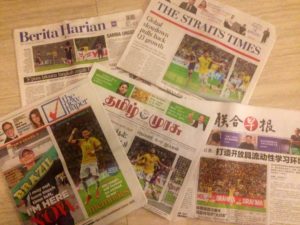 The match between Japan and Brazil in Singapore can be considered as the biggest event for Singapore and Japan football community in 2014. Just after FIFA World Cup, and with a limited time left for the Asian Cup, it was a huge challenge for the Japan team to play a friendly away match against  a strong opponent like Brazil. Interestingly the match was held in Singapore, a neutral ground.

It definitely fulfilled the expectations of all the concerned including J.League and JFA that are trying to establish a foothold in South East Asia, Brazil team that has a contract with sponsors to have a certain number of matches in Asia, Singapore government that wants to be known in the international football community and the big advertising companies that want to make big business by coordinating such events. Of course the goal of strengthening the Japan team (by playing against a very powerful opponent and on foreign soil) was also achieved.

Later, there is also a plan to have a training camp in Singapore in February, before the first qualifying round to be held in Malaysia, for the U22 team preparing for Rio Olympics.

Singapore’s GDP per capita has already surpassed Japan, and it has started putting greater emphasis on arts and sports along with the improvement of economy. Moreover, since it is a small country with population just about 5.4 million it has to make efforts to retain its position as the central hub of SEA and also make progress. The Singapore National Stadium (where the Japan – Brazil match was played) and all the sports facilities in its premises are together called the Singapore Sports Hub. At the same venue, before the Brazil match, the prestigious Juventus of Serie A of Italy was invited to play a friendly match with the Singapore Selection team. Moreover, South East Asian Football Championship- Suzuki Cup, sponsored by many Japanese companies was also held in the same stadium in Singapore this year. SEA Games 2015, also known as Olympics of South Eat Asia, will also be held in Singapore. European League season matches like the British Premier League are also scheduled.

But on the other hand, Albirex Niigata Singapore, which has been playing in S League since 2004, has given a tough competition to other teams in 2014 season and is making its presence felt. Albirex, as an independent club team is widely recognized by the local football fans and is highly admired by the Singaporean media related people. Moreover, Yosuke Nozawa, an experienced goal keeper will be transferring to Albirex Niigata Singapore. Yosuke Nozawa presently plays for Matsumoto Yamaga Football Club that will be promoted to Division1 of J.League this year. Former professional football player Kazuyuki Toda has also played for S League in the past.

Along with Albirex there is another Japanese Football club known as GFA (Global Football Academy) that conducts football school for the younger generation. GFA team plays in the NFL Division 1 with the name GFA Sporting Westlake FC and is quite successful. (NFL club cannot be promoted to S-League automatically under the current regulations)

Not just Japanese clubs but many other foreign football clubs have established football schools for children in Singapore. Well known clubs like Arsenal, Chelsea, Manchester United, Milan, Juventus, Real Madrid, Barcelona etc from England Premier League and other popular leagues in Europe conduct football schools and are popular in Singapore.

Shinji Kagawa’s Borussia Dortmund has also opened its office in Singapore and its connection to Bundesliga has also become a topic of discussion within the football circle in Singapore. In the year 2015, when many Japanese companies are trying to expand their businesses in South East Asia in order to increase business, who knows, J.League will also setup an overseas office in Singapore in near future.

In SEA, the expansion and progress of J.League is more prominent in Thailand, Indonesia, Vietnam rather than Singapore. In case of Japanese companies also, though the market is in the surrounding countries, they have their management base in Singapore. 2015 will undoubtedly see a rise in football market in SEA and focus will be on how Singapore, the Asian hub will make use of the opportunities.