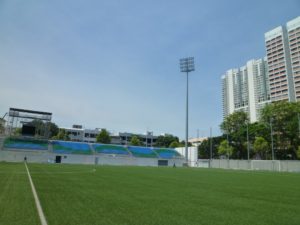 According to The New Paper, a nation-wide Singapore newspaper, there has been recent confirmation that the Japan U-22s, who are heading to Rio Olympics in 2016, will play the Singapore U-23s on February 14th in Singapore as a practice game for the tournament.

Japan U-22, lead by their coach Makoto Teguramori, will include a training camp from February 11-15th to their stay in Singapore, along with the Valentines Day matchup with the Singapore U-23s. The opponent, Singapore U-23 will use their match on Valentines Day as part of preparations for the SEA games that will also take place within the island nation.

The Japan U22 vs Singapore U23 match on February 14th will take place either on the artificial pitch at Jalan Besar Stadium, based in the southern-rural area of Singapore, or Yishun Stadium with natural turf, located at northern part of Singapore. Jalan Besar Stadium was also the host for the 2006 World Cup qualifier between Japan and Singapore that took place in 2004.

A large percentage of the Singapore U-23s squad represents the “Young Lions” team playing in the national S.League (Singapore 1st Division). This model is quite similar to the “J.League U-22 Selection” who competes in the J3 League and make up a majority of Japan U-22. The Football Association Singapore (FAS) also has the “Lions XII”, a Singapore-wide team that competes in the Malaysian Super League and Cup. Singapore U-23 is mostly a combination of players from both these teams.

Japan U-22 will also use the Singapore friendly to help adapt the team climate and environment for the 1st round of the AFC U-23 Championship in Malaysia. Japan U-22 has Macau, Vietnam and Malaysia in their group. The teams from each group with the most wins in the U-23 Championship proceed to the finals stage in Qatar next January. The top 3 finishers in the overall tournament gain a spot to go to the Rio Olympics as Asian representatives.